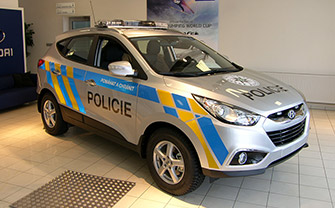 Czech police have no money to buy Tucsons

Hyundai Motor Czech has signed an agreement with the Ministry of Interior to supply police cars. In total, more than 800 Tucson cars were to be delivered to the Police of the Czech Republic. According to the latest news, however, the contract may not be as big as it was signed.

“With the purchase of Hyundai Tucson, the Police of the Czech Republic can save several tens of millions of crowns selected from taxpayers than if the cars were bought from other bidders,” Hyundai said in the summer.

“We are honored that one of our customers is also the Police of the Czech Republic and we are looking forward to mutual cooperation, which is also for the benefit of taxpayers. We believe that our cars will be a reliable and indispensable support for the Czech Police for years and will contribute to safety and public order, contributing to the satisfaction of our other customers, “added Vladimír Vošický, Managing Director of Hyundai Motor Czech.

Now, however, the prospect of a big deal is moving away. “Even if the framework contract is still valid, the police will probably take only a fraction of the estimated number of cars,” on-line web zdopravy.cz writes.

According to data in the contract register, the Czech Police have ordered only 26 Tucsons vehicles with two-wheel drive and a six-speed gearbox and 43 four-wheel drive vehicles. No more orders are available, even if a large framework contract talks about delivering up to 809 cars. The contract expires on 15 December, 2017.