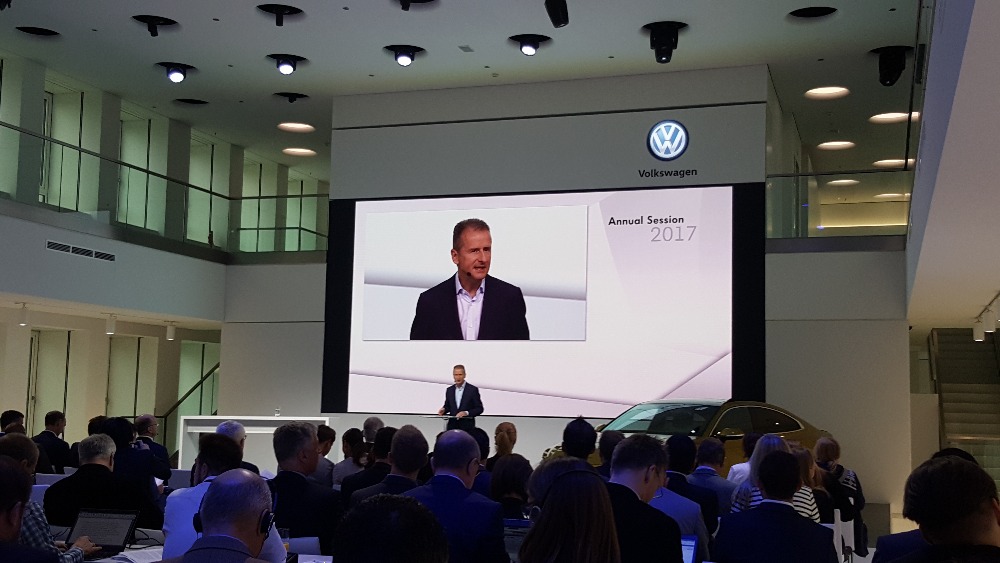 VW CEO gears up for labor fight over overhaul

Volkswagen Group is facing crunch time to deliver on a pledge to become a global juggernaut shaping future transportation.

Nearly a year into his reign, CEO Herbert Diess has stepped up crucial parts of an overhaul of VW’s 12-brand global empire to gain speed and efficiency and fight new and old rivals. He’s trying to push through a partial share sale in VW’s trucks division and other structural changes.

His next opportunity to press his case comes this week, when VW presents annual earnings, and the former BMW executive has his first official large-scale meeting with analysts and investors since becoming CEO in April.

VW already presented preliminary earnings in February that met expectations and forecast a rise in revenue this year despite challenging conditions.

Diess, known for hard-as-nails tactics and a healthy appetite for a fight, risks losing momentum if he cannot keep in check rising tensions with VW’s powerful works council.

While Diess has the backing of Wolfgang Porsche, a leader of the Porsche and Piech owner family, worker representatives hold half of VW’s supervisory board seats. They often vote as a block with the state of Lower Saxony, which holds a 20 percent stake.

Together they can easily block deeper cutbacks among VW’s high-cost German workforce, and have resisted structural changes like selling non-core assets such as the Ducati motorcycle brand.

With VW’s namesake brand and Audi, its biggest profit center, continuing to trail competitors in profitability, Porsche last week slammed VW’s “fossilized structures” and the strong sway of unions standing in the way of progress.

VW’s top labor representative, Bernd Osterloh, wasted no time turning the lens back on management failures, citing the mishandling of new WLTP emission tests in Europe that cost the company about 1 billion euros ($1.1 billion). And then there is the diesel-emissions cheating crisis that has so far cost VW 28 billion euros.

“All of these are management issues, which have nothing to do with the workforce,” Osterloh said in a statement. “This has cost the owners several billions already, and that’s what the supervisory board should focus on.”

The main points in focus for VW this week are:

One of the first union issues for Diess to defuse is a dispute over a plan to add a low-cost factory in eastern Europe. VW had planned to narrow a list of possible locations in Turkey, Serbia, Romania and Bulgaria, with a goal of picking a site in time for the next supervisory board meeting in May, according to documents seen by Bloomberg.

VW’s labor representatives are resisting, pointing to delayed other vehicle projects and struggles to safeguard utilization of several existing factories in Germany and other European countries, according to the documents.

“VW has an incredibly strong executor at the top — if he can’t turn VW into a more agile and value-oriented business, we wonder who can,” said Arndt Ellinghorst, a London-based analyst at Evercore ISI. “VW’s governance remains the root cause for the tiring power-struggle between management, the supervisory board and the works council.”