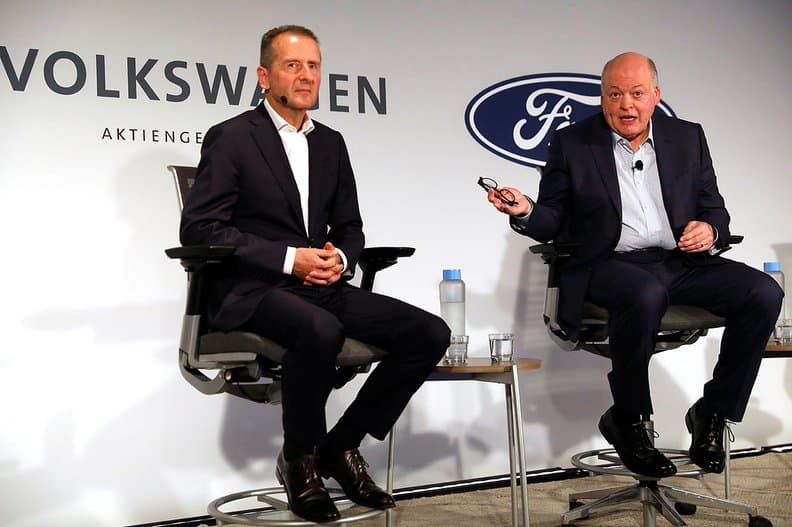 Volkswagen Group and Ford Motor Co. are expanding their budding alliance to collaborate on development of electric and autonomous vehicles, with the German automaker investing $2.6 billion in cash and assets in Argo AI, and Ford agreeing to use VW’s flexible electric vehicle platform for a future battery electric vehicle in Europe.

VW’s supervisory board signed off on the expanded partnership during a meeting Thursday in Germany. VW CEO Herbert Diess and Ford CEO Jim Hackett appeared together at a Wall Street hotel in New York on Friday to brief investors and journalists on the latest collaboration.

The two automakers agreed in January during the Detroit auto show to work together on development of midsize pickups and commercial vans for use outside North America. At the time, both Diess and Hackett said further collaborations were under discussion.

• Volkswagen will invest $2.6 billion in Argo AI, with $1 billion in direct funding, and VW’s Munich-based Autonomous Intelligent Driving unit, valued at $1.6 billion, will become Argo’s new European headquarters. It will be led by AID’s CEO, Karlheinz Wurm. AID has about 200 employees, with most working on developing self-driving technology for Volkswagen Group. The combination will give Argo AI over 700 global employees. Argo AI is focused on developing a Level 4 self-driving system primarily for ride sharing and goods delivery vehicles in dense urban areas.

• Volkswagen will purchase $500 million in Argo AI shares from Ford over three years. Ford will invest the remaining $600 million of its previously announced $1 billion cash commitment in Argo AI. Together, the transactions will make Ford and VW equal partners in Argo AI, placing a value on the Pittsburgh-based tech company at $7 billion. The two automakers will hold the vast majority of Argo AI’s shares, with the remainder to be used as an incentive pool for Argo AI’s employees.

• Ford will use Volkswagen’s modular electric toolkit, known as MEB, to design an all-new battery-electric vehicle for its European operations. Volkswagen will supply MEB “parts and components” for the as-yet-undisclosed BEV, which will be built at a Ford plant beginning in 2023. The Dearborn, Mich.-based automaker said it plans to deliver over 600,000 MEB-based vehicles in Europe over a six-year period, and that a “second all new Ford model for European customers under discussion.”

In a written statement, Bryan Salesky, CEO of Argo AI, said the investment from VW, joining Ford, will give his company a competitive advantage in attracting talent. “Plus, thanks to Ford and Volkswagen, Argo AI technology could one day reach nearly every market in North America and Europe, applied across multiple brands and to a multitude of vehicle architectures.”

Hackett and Diess, in statements distributed before today’s briefing, emphasized the benefits and synergies the additional scale of working together on expensive EV and AV technologies can bring.

Hackett said that while VW and Ford remain independent and “fiercely competitive in the marketplace, teaming up and working with Argo AI on this important technology allows us to deliver unmatched capability, scale and geographic reach. Unlocking the synergies across a range of areas allows us to showcase the power of our global alliance in this era of smart vehicles for a smart world.”

“Looking ahead, even more customers and the environment will benefit from Volkswagen’s industry-leading EV architecture. Our global alliance is beginning to demonstrate even greater promise, and we are continuing to look at other areas on which we might collaborate,” Diess said in the statement. “Scaling our MEB drives down development costs for zero-emissions vehicles, allowing for a broader and faster global adoption of electric vehicles. This improves the positions of both companies through greater capital efficiency, further growth and improved competitiveness.”

The automakers’ previous collaborations in midsize pickups and commercial vans will proceed apace, with Ford agreeing to source and build a midsize pickup to replace the aging Volkwagen Amarok in Europe, Africa, the Middle East, South America and Asia beginning in 2022. Of nearly 350 models across its many brands around the world, the Amarok is the only light-duty, body-on-frame vehicle Volkswagen manufactures.

Regarding commercial vans, Ford will design and build a large commercial van for both companies, beginning in 2022, for European customers, while Volkswagen will do the same for a city van for Europe and “other select global markets.”

Jessica Caldwell, executive director of insights at Edmunds, said the deal “feels like a watershed moment for both Ford and VW. Ford has taken flack for years for not having a robust EV strategy and VW has had its own fair share of challenges, but this can help both companies reinvent themselves as innovative technology leaders.

“The combination of these two massive automakers is exactly what needs to happen to accelerate the adoption of AV and EV technology. Convincing car shoppers to go electric en masse is not an easy code to crack, but having two companies the size of VW and Ford working together to solve the puzzle could speed up the process,” she said in an emailed statement.